This past year was an awfully productive year, with plenty of unexpected opportunities for publishing some content.  As I’m prone to going back and searching for my own content, I figured a year-end post (that is only a week late) would be a perfect opportunity.

Starting off the year, working with numerous colleagues, we published some labs for using Docker Containers and Cloud Foundry runtimes to manage Web App Hosting Workloads.  These are severely dated as of now, but I wanted to include them for history.

Next, we followed up with some Big Data on Cloud work and published a lab for running some hybrid data scenarios on Bluemix

How big is Big Data? Get hands-on experience today

Next, I kicked off an article series on DeveloperWorks for microservices, titled “Microservices In Action”.  This would be the first step in my microservices journey for the year.

Supporting some of my peers attending DockerCon NA 2015 in San Francisco, I published a couple blog posts on Docker, containers, and what we were doing with reference architectures through the first half of 2015.

The Power of Containers in Bringing Reference Architectures to Life!

Following up on some of the problems solved in our labs and looking at reusable scenarios, I published a pretty popular article on how to feasibly use IBM Bluemix services inside a container, running on IBM Containers in Bluemix.  This one was pretty spot on at the time and still is very popular as of today!

Following up on my Microservices In Action series, I published a second post in time for DockerCon EU 2015 in November.

Also, just in time for DockerCon EU 2015, we launched microservicesTV, a video series to cover all things business and technical about microservices in the enterprise. 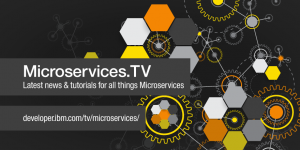 I planned to write a lot more here (rickosowski.com) over the course of the year, but got sidetracked with all of the above.  I’m sure I missed a few things that happened in 2015, but am committing to publishing more than 3 posts here for 2016…